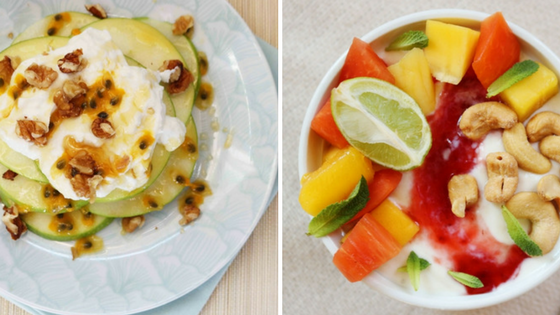 Greek Yoghurt is a high protein, low fat food, but it can get pretty dull eating it on its own.  Here's a couple of simple recipes that take about 5 mins to whip up and will breath life into this great ingredient.

I'm a huge fan of having greek yoghurt in nutrition plans.  So much so that, unless a client has a real aversion to it, I try to incorporate it in as many meal plans as possible.

Having the slow release protein last think at night before you go to bed is the perfect recipe for feeding your muscles and getting maximum recovery while you're in the land of nod and dreaming of dumbbells and that deadlift PB.

I love mixing in an extra scoop of protein powder, throwing in a handful of sultanas, a swirl of honey, and maybe a cheeky Oreo cookie or two if the macros allow.  And if I've saved up the calories a couple of scoops of Ben & Jerry's chocolate brownie ice cream hit the spot just right after a hard leg day at the weekend.

And Greek Yoghurt is not only good for a late night protein hit, it can be used at any point throughout the day.  Throw in some granola and a dollop of honey  and you've got an awesome breakfast.  Or how about mixing it with some chicken and bacon and spreading it on a warm toasted panini for delicious lunch?  The list of recipes is endless.  You just need to put the mind to work and get creative.

The recipes I've got for you today are designed to be really simple to make and add a big hit of flavour to keep you coming back for more.

I highly recommend you try Fage Greek Yoghurt.  I've found this is the best tasting yoghurt out there.  It's got an extra level of creaminess that the others can't seem to replicate.  To me it's great just straight out of the tub.  So if you've previously been put off, give Fage a try and you'll notice the difference! p.s I don't work for Fage, so I'm not on commission, I just like it...hahaha...

So without further ado, let's dive straight into Meal Prep Sunday and...